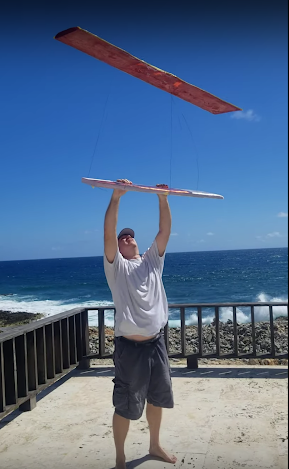 See the previous post for our basic idea of using Maslow CNC to cut foam frames for airplane wings and also to reduce the weight of flexible solar panels.   This type of wing seems light and strong enough and does not take much time to make.   So we can experiment with airplane designs and not be set back too many hours if one crashes or is lost at sea.

The goal is a low cost easy to build solar airplane.  This way we can use them for patrolling.   There is a risk that if cloud cover comes they might not make it back, so we just don't want them to be too costly in terms of time or money.

We plan to use iNav as the software for the flight controller.   This can work with regular planes, flying wings, differential thrust planes, etc.   It also has conditionals that seem useful to us.   Not sure exactly which flight controller yet and don't think the rest of the design will care too much which is used.

We will use the DJI FVP system with "air unit" and goggles to control the plane.  This can reach up to 10 km and has nice digital image.   Other people could use other radio control systems though with minimal trouble I expect.

There are studies that show that having a propeller on each wingtip that rotates against the wing-tip-vortices will be much more efficient.  Numbers like 25% more efficient.   If we were close to working on solar, an extra 25% could be a big deal.   So the propeller on the right wingtip will rotate clockwise when viewed from behind the plant and the one on the left wingtip will rotate counter clockwise when viewed from behind the plane.   We would really like to try this out.     It seems like such an interesting idea and odd that I can't really find much real testing of it.   So I feel compelled to try it.

iNav has differential thrust, so it can control yaw with the two motors.  We may not need a vertical stabilizer and the drag that comes with.

No weight for separate charge controller

It seems that we can avoid having a separate charge controller.   The flight controller knows the battery voltage and can do things to keep the voltage in the right range.   We can have conditionals based on the battery voltage.  So we can sort of operate in different modes.  Maybe:

Working out optimal voltage, motor, battery, propeller, and ESC choices is something we still have to figure out.     We would like to average well under 50 watts, maybe under 25 watts.   But peek must be over that so that we can do the flight controller could always send enough to the motors to use all the power from the solar if the battery were full.  This decision also ties in with the battery.

We want some small battery so that a short time under a cloud does not crash the plane.   Need to figure out what type.

There are lithium ion batteries that do not need external balance chargers like LIPO batteries.

I expect we are flying slow, like 20 to 25 MPH.  I am currently think a weight target of 2 lbs.  The optimal motor and propeller will depend on these numbers, which are not really known yet.  So probably we will want to get several sizes around the expected values.

To get lined up on the right glide path for landing it is nice to have spoilers and flaps.  If you have a tail and an elevator  then iNav can use the two ailerons as flaps or spoilers.    So thinking it is worth having a tail and elevator.

We can now draw things in CAD software and cut them.  So we can iterate over different wing designs with reasonable speed.

We will publish the ".nc" files for our Maslow so other people can also experiment with these.   They will be free to use but not publish on your own or sell.  We also like the idea of paying people  may also be willing to buy interesting designs that improve on our core idea from other people to put on our website.   If someone makes an interesting improvement, and they are willing to turn the rights over to us, then paying something on the order of $1,000 US depending on the amount of improvement would seem reasonable.   Getting more people working on this idea would be great.