The manufacuter of our F2X5S solar panels,  solarealdrone.com , said they use Super Glue (with Cyanoacrylate) to glue them on foam planes.   The nice thing is it dries really fast.  We got some Gorilla Super Glue.   Here is a video the company made about how to attach panels to a foam wing and wire them up:

To fit the solar panels on our Opterra we needed to remove some bumps on the top of the wing and cut a bit off the edge of the ailerons.   To remove the bumps we used a couple guides and a small hotwire as shown below: 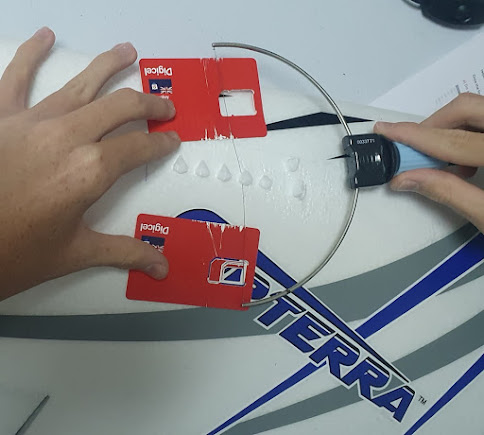 We cut out a piece of the aileron and glued it in the old gap to make end section fixed to the rest of the wing, so there was a bit more room for the solar panel. 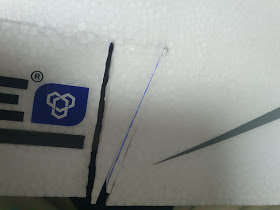 We taped one edge of the solar panel so it could act like a hinge and make the solar panel in the right spot as we were rushing to do the glue.   We lifted it up, put the glue on the foam close to the hinge side, then folded down the solar panel and held it for a minute.  Then we lifted up a bit and put glue under the opposite side then held it down for a minute. 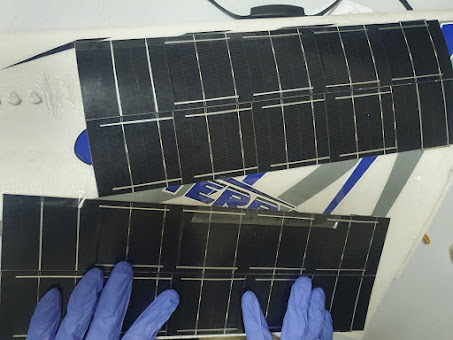 Next we soldered on some wires.  First a wire between the two panels.  So each wing is two panels in series.   Then from these we need wires that can go into the fuselage.   We first did the wing on the right and have a red and black wire to the panels but realized this is extra drag compared to the flat wire the company sent with the panels.   So on the left we first get to the edge of the wing with the flat wire then switch to a red and black wire.  We glued the wires down.

So this is what it looks like.  These 4 panels will produce about 46 watts peak.   In a future custom airplane we expect to have 8 panels but this is a nice way to start.  This took two of us about 2 hours but I am sure we would go faster next time.

The hope is that with a big battery that could normally keep the plane up for 1 hour we could now stay up for 2 hours.   Will post again when we have flown and found out.