This above video goes through the history of full scale solar projects.

The next is a RC solar airplane similar to one I bought from Mr Watt in 2019:

Below is a very light solar RC plane with no battery:

The next one is "Solar Plane V4 flying wing".  This guy has 3 earlier solar designs).   He used a 360kv motor and large folding prop.  He also has video of a long cross country mission with this plane.   He mentions a "solar bear" that adjusts throttle servo signal to ESC based on solar voltage to stay at MPPT voltage.  This is the very much like my idea of using the flight controller to adjust the throttle to stay at MPPT voltage!

The GBA Solar Bear is an RC airplane for sale.   It does not have a battery but, as mentioned above, adjusts the throttle to keep solar cells at the most efficient voltage.   More here and here.

Next video shows an RC plane that flew over 200 km in 2016.   Another video shows how it was built.  They did not use a MPPT and had something so they could disconnect the solar cells if the battery was full.  Used a 650kv motor and an 11x10 prop.  Our plan of a flight controller and DJI Air Unit is much simpler electronics (though not an option in 2016).

I love this next one.   It is done since I started this blog.  It is solar, has 2 motors, and can even do VTOL.   With the supercapacitors I have thought of doing VTOL, at least the vertical take off part.  They did not put the two motors right at the ends of the wing (which I want to explore because I think it is very efficient).   The way they have it has the propwash going over the elevons so they have good control even in hover.

This next one first shows two crashes of planes they spent many hours building before the successful 8 hour flight.   We really want a fast to build method so that when we lose a plane it does not hurt our heart too much, and we can try again soon.

And a version two of above with motors on a rechargeable battery.  This is only 163 grams (0.36 lbs) and  peak 15 watts.  However, on the day he flew he measured about 5 watts.  This means 15 watts/lbs flight is possible.

This next one uses solar panels from the same company we bought from.

This next one uses solar panels from the same company we like.  They MPPT they used limited the power they got.   We don't expect to use an MPPT so should not have that problem.   Also, it is a less efficient design that we are aiming for. 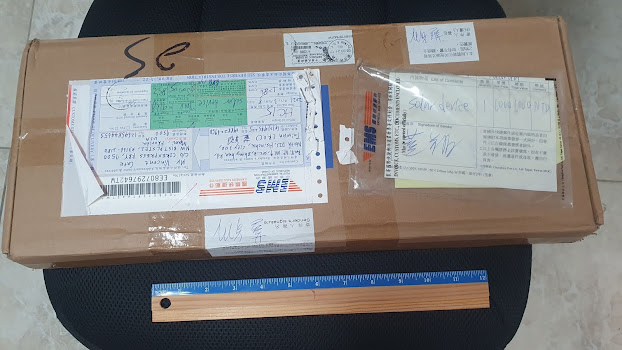 We got our solar panels from  solarealdrone.com !   They were very well packed and all seem fine.  The cost was $1.90/watt.  They are so small and light that express shipping from Taiwan to the USA was very reasonable.   They also included 2 MPPT boards and some wire good for solar panels for free.  The solar panels are about 15 inches by 5.5 inches. We got 18 solar panels and the total weight for all 18 was about 528 grams or 29.3 grams per panel. The side view showing how thick a stack of 18 solar panels is: The back of one panel showing wiring: These panels are their F2X5S panels.   The MPPT voltage for these is 5.72V and at that voltage it produces 2.04 amps for a total of 11.66 watts. Next to get them on a plane and into the air.   These seem like a very good product for solar RC airplanes.   Very happy with them so far.     We will probably put 4 on an Opterra (46.4 watts) and then 8 on a custom airplane (93.3 watts).
Read more